"There are six flavors,
and of them all, salt is the chief."
Sanskrit Proverb 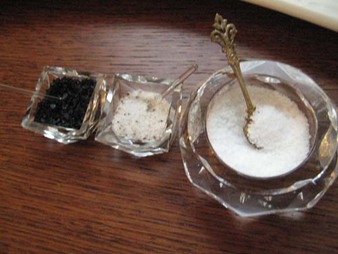 The six flavors are: sweet, sour, bitter, spicy, bland, and salty. Salt is our first seasoning, a mineral used to preserve food and purify water. By 6500 B.C. salt mining was under way at Hallstein and Hallstatt near Salzburg, the Austrian "city of salt."

The expression "worth one's salt" harkens to a time when salt was currency. Originally, goods and service were paid for with salt; later, Roman soldiers were given an allowance, or a salarium to buy salt -- hence the term salary. In the Satyricon, Petronius coined the expression "not worth his salt," a word for an indolent soldier, or one far from valiant. To spill salt implied recklessness or lack of self-control, a superstition depicted by Leonardo da Vinci in the The Last Supper, a scene that portrays Judas spilling salt. The biblical expression "salt of the earth" implies a person of merit or one who is admired. To take something "with a grain of salt" suggests skepticism.

At one time, salt was considered a protection from evil and witches and was used at sacrificial meals where oaths were made. The devil was said to dance on the left side, so to prevent misfortune, a pinch of salt was thrown over the left shoulder, supposedly into the devil's eye. The expression "covenant of salt" derives from sacrificial ceremonies where salt was used to preserve a pact. The Arab saying "there is salt between us" implies trust. In Russia, guests are greeted at the door by a host bearing a tray of bread and salt, a gesture called khleb-sol meaning "bread-salt," a symbol of hospitality representing the staff of life.

In the Middle Ages, during the cold winter months of northern Europe, animals were expensive to feed and fishing was difficult to pursue. To ensure a steady supply of food in the winter, great slaughters and heavy fishing took place in the fall. Much of the meat and fish were cooked and eaten immediately; the remainder was preserved with salt or smoke.

From the Middle Ages to the Renaissance, salt was derived primarily from evaporated salt springs and was known as brine salt. "Bay salt" came from sea water, mainly from the Bay of Bourgneuf at the mouth of the Loire River; this was coarse, impure salt usually used to cure food. Salt used at the table was purified.

So vital to life was salt that it denoted rank and defined seating arrangements at table. People of power and importance sat at the high table, "above the salt," while those of lesser rank sat at tables "below the salt." Because salt was scarce, it was prized and served in vessels fashioned beyond all proportion to the amount they held. The containers ranged in height from 8 to 22 inches or more. They were modeled in magnificent shapes and used as centerpieces at the high table: for example, they might be made as a miniature replica of a rigged sailing vessel supported on wheels and rolled along the table. Of particular note is the master salt cellar made by Benvenuto Cellini, a work commissioned by Cardinal Ippolito d'Este, and completed in 1543 for François I of France. Made of gold, enamel, and ivory, the famous salt cellar was a mythological interpretation of the interaction of sea and earth, represented by a nude male and a nude female figure in a reclined position; the vessel can be seen today in the Kunsthistorisches Museum, Vienna.

Salt is a corrosive agent that must be placed in an abrasion-proof container of ceramic, wood, acrylic, or glass. To prevent corrosion the interiors of silver salt shakers are gilded. Salt shakers that are not gilded are wiped clean with a damp cloth to pick up all the salt crystals.

Because salt bears a close resemblance to arsenic, at medieval meals salt was tested by an assayer for poison; after the meal it was locked in the cellar for storage against theft -- hence the term salt cellar. At one time, salt holders were called trencher salts, a name for bread baked with a depression in the center to hold salt. Toward the late seventeenth century, trencher salts were made as larger glass bowls. By the eighteenth century, salt cellars were made of silver, silver gilt, gold, and Sheffield plate, ornamented with elaborate decoration and customarily fitted with glass liners. Today, salt cellars are diminutive bowls approximately 1 to 2 inches high by 2 to 5 inches wide, made of glass, silver, or silver lined with glass.

The salt shaker was originally made as a container to enclose salt for protection from the dampness inherent in cellars. Today, the salt shaker provides a freely flowing source of salt, a dispenser that sprinkles salt evenly over food. However, salt shakers are used only at informal meals, elegant or otherwise.

When salt is requested at a meal, as a courtesy to the diner the salt and pepper shaker are passed together.